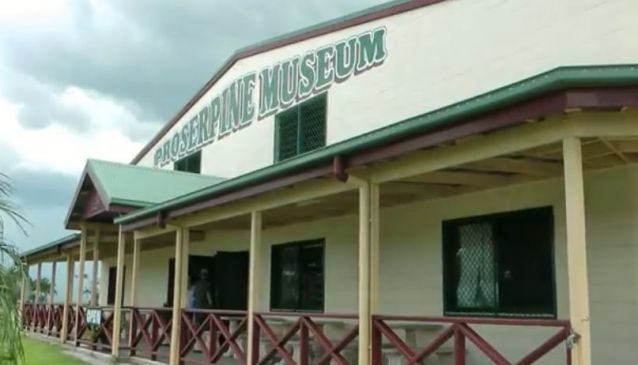 Winner of 2005, 2006 and 2007 Tourism Whitsunday Awards, and commended in the 2008 Queensland Tourism competition, Proserpine Historical Museum covers the history of its industries, its natural recourses and community life. This is a unique place, a place where time flies when you become engrossed in the stories of this little town.

There are special exhibits on the sugar cane industry, gold mining and the Gunyarra World War II Gas Experimental Station; perhaps not what you would have expected from a small town museum.

Sit back on the veranda, just like the visitors years ago did. There are tables and chairs where you can imagine yourself in the days of the sugar cane fields, or perhaps get the children to take part in some of the interactive activities to help them understand what happened here. There are multi media productions about the local military sites and famous people of the area as well as displays about the sugar cane industry from planting to harvesting.

You can also meet Digger, a little green locomotive who is extremely popular with steam train enthusiasts. In his day, he was a fully working member of the sugar mill railway. The museum is also where you can learn about Sidney Cotton, aviator, inventor and spy who was born at Proserpine in 1894. Cotton was the person who invented the Sidcot Flying Suit, and at the end of World War One he worked with Ian Fleming, writer of the series of James Bond stories, at MI6.

One of the most unusual exhibits in the museum is that of the Gas Experimental Station. The facility was built to investigate an aerial bomb filled with mustard gas which troops found when they over ran a Japanese airfield during World War II.

The museum is open from Monday to Friday, 9am to 4pm. Run entirely by volunteers, the costs remain low - with entry only $6 per adult and $3 per child. The volunteers also offer guided tours and can help explain more about the exhibits and the history of this rather unique little museum.