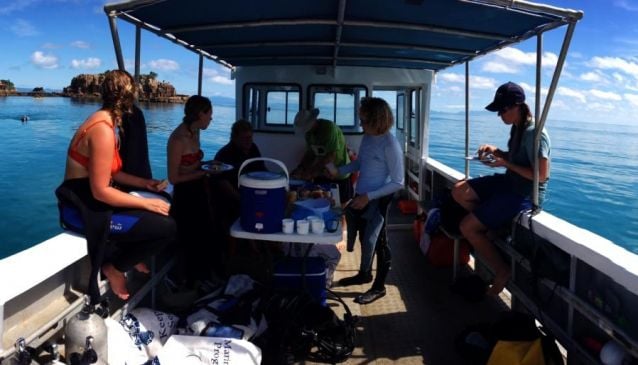 There are two conflicting facts when it comes to the Whitsundays. The first is that the environment is very special; the beaches and the waters are an exceptionally delicate eco system all of their own. The second fact is that annually it's estimated that 6.4 million tons of litter end up in the world's oceans. So why doesn't any of this litter float its way to the waters in and around the Whitsundays? The unfortunate answer is that some of it does; however, there is a group of people who work extremely hard to make sure that it's removed before it does any damage. They are the volunteers of Eco Barge Clean Seas.

This awesome group of people has removed over 100,752 kilo's of marine debris from the Whitsundays since July 2009; that's a huge effort. The group was established to protect the precious marine life and the environment, to create awareness and educate local people and visitors on the issues surrounding waste disposal. Eco Barge Clean Seas have three initiatives: The Whitsunday Marine Debris Removal Program, which at the beginning of 2013 was part of a rapid response team to remove boat wreckage along the Airlie Beach foreshore after ex-tropical Cyclone Oswald. Operation Clean Seas, where everyone in the local community is encouraged to take a few moments off from fishing and boating to remove debris from the water and the land around them, and The Mackay Coastal Clean Up Program. As the name suggests, this program is designed to remove marine debris from the beaches and waters of the Mackay region.

Marine debris impacts the whole Whitsunday region as it acts as a barrier between the Queensland coast and the areas further north - including the Great Barrier Reef Marine Park. Whilst that's good in one way as it protects the delicate reef, it's also bad in another as it acts as a natural collecting point for debris which is carried along by the trade winds. Add to this the amount of visitors and water-based activities, and it's a tough job keeping the area in tiptop condition.

But it's not all work and no play for the volunteers, the social scene involved with marine clean ups is a good one and there's always a reason to celebrate. So as well as cleaning up the beaches and the water, they enjoy sausage sizzles, fun days with jumping castles for the kids, competitions to win some fantastic prizes and fabulous evenings out under the stars. And it's not just for residents of the Whitsundays, everyone is welcome and that includes visitors on holiday, gap year students working their way around Australia and those who are on extended leave. Holidays and breaks from work don't have to mean lazing on a beach all day, although its nice, but its always nice to laze on a clean beach so why not contact Eco Barge Clean Seas and see what's on when you're in town. It's a great opportunity to do something good and meet some wonderful people into the bargain.

If you would like to know more about any of the programs, or if you can help, contact Libby and the team, they'd love to hear from you.